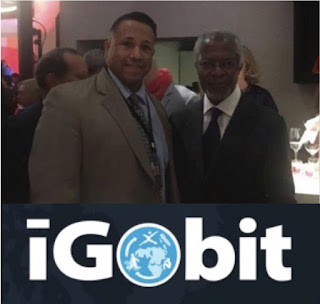 On 23rd January 2018, Asa Saint Clair the treasurer of our
intergovernmental organization World Sports Alliance announced at the
World Economic Forum in Davos the launch of iGObit a crypto active to fund
SDP initiatives in the member states of our organization. In Davos, he met
Kofi Annan, former Secretary-General of the United Nations. The meeting
was appropriate. Kofi Annan played a vital role in promoting sport as a tool
for development and peace. Let’s remember.

Kofi Annan. It is him who combined the first sport with the Millennium
Development Goals. As said by the United Nations: “The Sport for
Development and Peace agenda gained momentum when in 2001, former
UN Secretary-General Kofi Annan nominated former President of the Swiss
Confederation Adolf Ogi as his Special Adviser on Sport for Development
and Peace. In April 2008, Secretary-General Ban Ki-moon appointed
Wilfried Lemke, of Germany, as his Special Adviser”.

The right reasons to fund Sport for Development and Peace Initiatives (SDP)
https://www.igobit.com./
Posted by AreutSevices at 2:22 PM