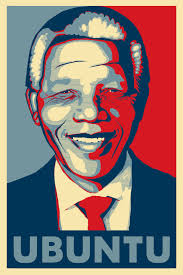 Which professionals for sport (2)?: The case of developing countrie

Which professionals for sports (2)?: The case of developing countries 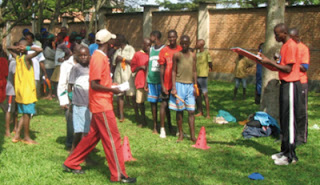 Which professionals for sport (1)?: For a common platform. 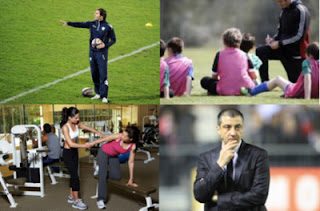 Youth Lifestyles: All Is Not Lost!

Youth Lifestyles: All Is Not Lost! 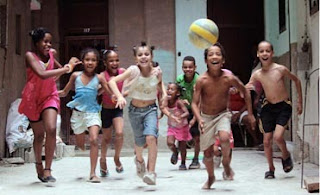 Hellenic
A few weeks ago, this blog began thus: “Sport – In brief. Around 770 B.C., in Olympia, the Greeks laid its foundations”. Some foundations, though interesting, remain often unknown. Let us remember two of them: migration and diet. Why migration? The first Games were attracting numerous panhellenic people, comprised of athletes and spectators. From Greece and colonies – Italy, Northern Africa and Asia Minor – people moved to participate or attend the Games, driven by a shared sense: belonging to a shared culture and a shared religion. Why diet? One month before, the athletes arrived at the stadium and alternated training with meetings. The competitors all followed a specific diet, made up of barley, of wheat, nuts, dried figs and cheese; Migration, Diet, and now.
Greek
That was in olden times, the symbol of the Pan-Hellenic exchanges, but the migration and diet issues still exist in the Greece of today. The country has become a symbol of globalization and consumerism. However, these issues have been taking a dramatic turn. Greece is the reflection of the incessant play between our local reality and the challenges arising at the global level.
Migration

Local. After being asphyxiated by debt, the Greek people are asphyxiated by the migrant crisis. There is no more local. Global. The populations are still transiting through Anatolia or Asia Minor. This time, they are suffering populations fleeing countries at war. We are looking at a summary of the major worldwide problems: economic liberalization, migration phenomenon, etc. There is no more global. The migration issue related to sports is no less dramatic. I outlined some challenges in the fourth article of this blog. Today, I will focus on the lifestyles issues, between daily realities and global challenges.
Health
How does this question arise today in Greece? Local. At school, during a medical examination at the start of the year, a Greek child passes a test to measure his excess weight or degree of obesity and thus his subsequent cardiovascular risks. Global. This medical procedure provides a summary of the childhood and youth health situation around the World. European crisis? Certainly. 44% of young Greeks are overweight. 33% of young Italians. 25% of young Spanish. Compared to only 17% of young Swedes. But also a worldwide crisis. 29% in Mexico. 30% in the United States.
Diet
Local. In terms of lifestyles issues, the creation of a MacDonalds’ restaurant in San Bernardino – California, in 1940 managed to overcome a local tradition: the spreading in every Greek family, day after day, for several centuries, of the Cretan diet. Global. In Greece and elsewhere, American consumerism, the excess of fat and sugars, the obesity risks, prevailed over the abundant consumption of fruits and vegetables, cereals and olive oil, ancestral prevention tools against cardiovascular diseases. In Greece, MacDo finally overpowered the diet of the Olympian competitors.
Activity
Local. Those who are interested in lifestyles know it. Physical activity is a tremendous opportunity to burn excess fat. This habit always starts in a stadium, during a physical education class, a gym, stemming from the club’s directing committee. Global. The adoption of a daily or weekly physical activity varies between countries and cultures.  In Europe, 42%   of the entire population never engages in physical activity. 78% in Bulgaria. 59% in Greece.  Compared to 9% in Sweden, 14% in Denmark and 15% in Finland.
Overweight
Local. In an amphitheater, a specialist in sports sciences insists on the health benefits of . In the fitness clubs, every instructor transmits (or should transmit) the necessary knowledge and know-how to maintain health. Global. 44% of Greek children are overweight. 59% of Greek adults never engage in physical activity. The connection between European maps of physical activity and excess weight confirms the need for health-focused physical activity.

Generation
In the 1950s, those of my generation were accustomed to daily physical activity. There were the domestic tasks: walk kilometers to get to school, run to fetch bread, etc. There was the discovery of sport and outdoor activities, walking or running in the forest. More generally, for myself, has always been the opportunity, not only to be happy to be moving but also to leave the parent’s home and share moments of conviviality with friends. It is a generational issue. Let us look at young people’s lifestyles nowadays.
Sedentary
The survey “The Global Survey on Sustainable Lifestyles”, led in 2010, had already alerted us about young people’s lifestyles. It already showed young people who were mainly focused on sedentary home activities. “The young study participants live in very different countries and contexts, but they often describe their life and activities at home in very similar terms. If they think first about leisure activities, these are clearly focused on activities that involve appliances based on energy consumption”. Not their own energy, but the electrical energy.
Appliances
“Those appliances have become omnipresent in everyday life, at work but also at home, central in performing work, functioning in society, in managing one’s interiors and private life. Leisure and communications (computer, Internet, TV, mobile phone, radio) are the first set of activities they mention and what seems to take most of their time at home. The hegemony of computers, used either for work or leisure, as well as online communications, has become unquestionable for participants from all countries”.
Target
“Television is however far from being overtaken. Participants are heavily exposed to mass media, online or on television. These are the main channels to be used to reach them. In addition, the Internet has clearly become a very important channel of communication” (chat rooms, emails, Skype, social networks such as Twitter or Facebook, etc.).
Habit
“Other activities such as reading books, gardening, sports or even socializing are mentioned but more unevenly. Interestingly, most heavily used appliances or main activities – such as using a computer – are not always participants’ favorite ones. This is a lifestyle issue of high importance that questions what is done out of habit and what is really done by choice”.
Cooperation
The global survey shows also that young people have a high need for cooperative and non-intrusive initiatives at the local level, and generate voluntary but collective dynamics. Young people reveal a strong potential for participation and commitment.
Association
“In most countries, a big majority of participants are or have been part of an association in the last 12 months. They represent more than 80% of participants in Australia, New Zealand, Philippines, and South Africa. The fewest often involved in such activities or organizations are in Brazil, Egypt, Japan, and India”. “The organizations in which they are mostly involved are youth and sport, peace and humanitarian, as well as religious organizations. On average, 18.8% say they participate or have participated in environmental or sustainable development organizations”. At the question, “are you a member, or have you participated in a”, young people responded thus: 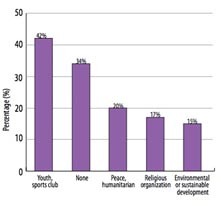 Commitment
Combined with their aspirations for more local integration and socialization, this demonstrates the potential for young people’s involvement in community projects or local democracy and management. That is why it is important to offer more opportunities adapted to their daily lives in order to contribute to positive and sustainable lifestyles.
It is not lost!
More and more sedentary lifestyles, but still an appetite for social life, notably through sport. The major question becomes: how to convince the young to adopt healthy, active and civic lifestyles in order to fight against sedentariness and chronic diseases? In a given country, the answer depends on cultural factors but mainly political ones. In Sweden, in Finland, a proactive policy to create leisure areas, to connect health and physical activity, in neighborhoods and villages, in schools, in clubs, in gyms. Regardless of the national sports policies, in the developed or developing countries, everything starts on the field. The role of the physical activity professionals is essential for acquiring these lifestyles.
Next: 17 March 2017 – Which professionals for sport?: For a common platform.
Posted by Unknown at 4:53 PM No comments: