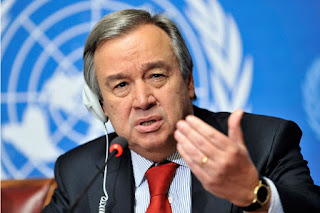 Africa has the means for its development,  including sports initiatives. I will return to the reasoning on the right reasons to finance initiatives in the area of sport for development and peace. But the news interrupts reasoning.  On 9th February 2018, in PyeongChang, Republic of Korea, on the occasion of the opening ceremony of the Olympic Winter Games the UN Secretary-General addressed some remarks to the press following his meeting with IOC President Thomas Bach.

I retained this extract:  “I am also very grateful for the exemplary cooperation between the International Olympic Committee and the United Nations. As you said Mr. President, your support in the protection of refugees, in combatting drug trafficking, in promoting gender equality, in the support of people with disabilities through your sister organization the International Paralympic Committee, but also in all other areas in which we are working together your support has been precious. We are extremely grateful.

This is somewhat perplexing and prompts me to interpret the new UN’s policy with caution. See next.

Follow an example of funding of SDP initiatives:
https://www.igobit.com
Posted by AreutSevices at 4:10 PM